Congratulations to all the participants of Fluxface in Space.


After nearly a year of planning and delays, our mission of organizing and presenting an exhibit in orbit has been accomplished with the landing of the Space Shuttle Endeavour STS-134. Both phases of the project have been completed.

Well done - we did it! If you would like to host an exhibition of the photo documentation of the Fluxface in Space project, please contact Cecil Touchon at the Fluxmuseum.
email: cecil_touchon@fluxmuseum.org


Thank you to all who came along on the journey and to those at NASA who made it possible.

Gary, Cecil and Angela
Posted by Fluxface in Space at 5:00 AM No comments:

Congratulations to the artists who had their artwork on board STS-134.

Video: NASA TV
Posted by Fluxface in Space at 9:41 AM 1 comment:

Congratulations to all the artists whose artwork was in orbit!

The Fluxface in Space Project, Phase One, on board the Discovery Space Shuttle STS-133 completed 202 orbits around Earth and a journey of 5,304,140 miles. From launch to landing the mission elapsed time was 12 days, 19 hours, four minutes and 50 seconds.

Fluxface in Space Exhibited in Chicago

As a part of Fluxfest Chicago at the Contemporary Art Museum in Chicago, Fluxface in Space including all the images of art and the images of the artists' self portraits was exhibited on a music stand in the performance area.
All participants may add a line to their exhibition resumes:

Let's hope for a spectacular lift-off and a safe return. In addition to carrying a large portion of our Fluxface in Space images, the Space Shuttle Discovery will deliver the Express Logistics Carrier-4 (ELC-4), a Permanent Multipurpose Module (PMM) and critical spare components to the International Space Station.


Update: The final mission STS-134 is scheduled for late April 2011. The actual date is uncertain at this time.

For those who haven't heard, the commander of this final Shuttle Mission, STS-134, will be Mark Kelly, the husband of Rep. Gabrielle Giffords who was seriously wounded by a gunman on January 8, 2011 in an assassination attempt. Gabrielle is making a remarkable recovery and it is hoped she will be attending the launch ceremony.

Posted by Fluxface in Space at 3:28 PM No comments:

The Fluxface in Space exhibition book is now available for purchase online: www.lulu.com/product/paperback/fluxface-in-space/12554445

Please order copies for yourself, family, friends, libraries, etc.
Posted by Fluxface in Space at 10:22 AM No comments:

FiS at the Ft. Worth Art Center 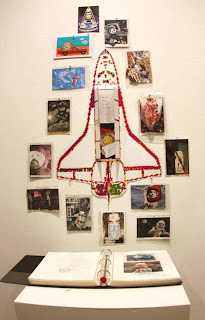 FiS at the Kennedy Space Center 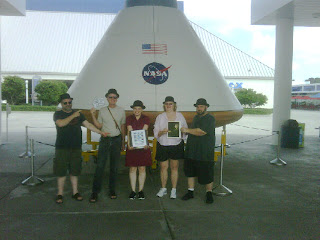 Fluxface in Space arrives at the Kennedy Space Center. 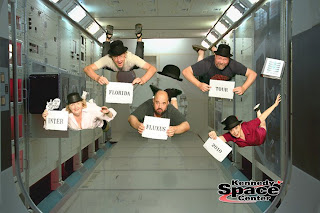 Please note: Fluxmuseum Director, Cecil Touchon, compiled a portfolio containing printed images of all the entries. For safety and security purposes (damage or loss) this folio was sent to the KSC event instead of the original artworks.
Posted by Fluxface in Space at 9:36 PM 1 comment:

I would like to thank Gary and Angela and all of the wonderful artists who have contributed to this historic exhibition. I am not sure any other museum can claim to have had the first contemporary, international group art exhibition in space. If anyone knows of such I would like to hear about it. Otherwise, congratulations to everyone for our wonderful success. I see that there are many fine works and what an inspiring display of global participation with artists from 26 countries! It is also a pleasure to see photos of all of the artists.

The shuttle missions will take off, I believe once this fall and the other early next year. So we will have to see what we can do to stir up some interest in our project as the launches approach. We shall like to have the exhibit travel around the surface of the world as well as in orbit and be seen by many. If you think you can arrange an exhibition in your city please drop a line to discuss the idea and place your city on the itinerary. The exhibitions will have to be arranged much like the Book About Death, in established art centers, museums or other art gallery environments. The exhibits could be as short as a week or even weekend so that we can arrange as many as possible in the coming months. If you have a science museum in your area perhaps they may have an interest in such an exhibit.

If you have a website or other online blog, network site page etc. please post an image of Angela's lovely rocket postcard and a link to this blog to help draw more audience to the exhibition.

Again thank you for making this a great exhibition.
Cecil Touchon, Director
The Fluxmuseum
http://fluxmuseum.org
Posted by Cecil Touchon at 9:21 PM 3 comments: 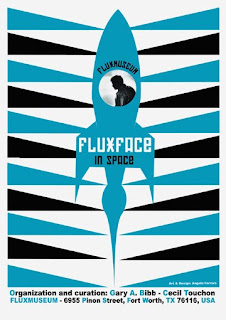 We are honored to have so many wonderful artists participating in this project. Thank you!

Exhibits of this project are being planned for the near and distant future. If you are associated with an exhibition venue or have suggestions for FiS (Fluxface in Space) exhibition opportunities, please contact Cecil Touchon at the Fluxmuseum. cecil_touchon@fluxmuseum.org

Thanks again - Gary, Cecil and Angela
Posted by Fluxface in Space at 12:25 PM No comments:

Posted by Fluxface in Space at 6:37 PM 2 comments: 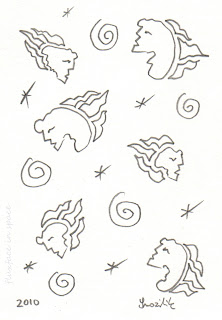 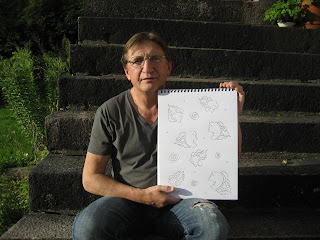 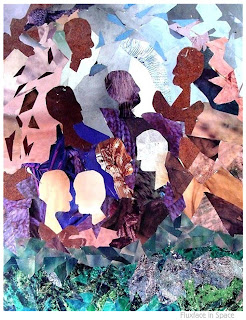 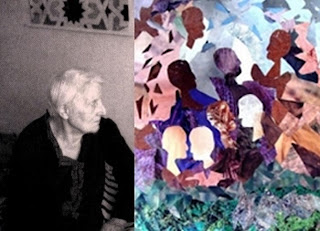 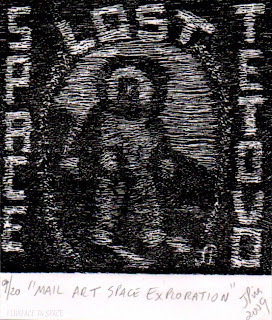 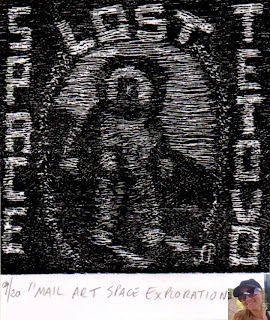 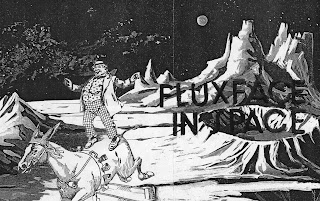 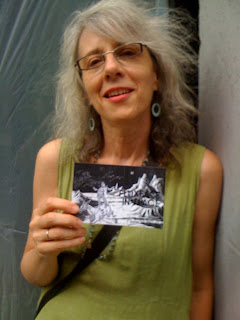 ad astra per ars -
to the stars thru art 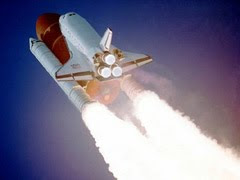 Gary A. Bibb, in collaboration with Cecil Touchon, conceived an exciting new exhibition project for the Fluxmuseum. Utilizing the Face In Space Program from NASA - they organized a "Fluxface in Space" exhibition to be launched into orbit on the last two Space Shuttles! These final missions will include a rendezvous with the International Space Station.

127 artists from 26 nations created an original postcard sized work of art, in various media, interpreting the themes of Space Exploration & the Arts, the Shuttle Program, Outer Space, Rockets, Astronauts, Astronomy etc. This will be a commemorative project around the fact that the Space Shuttle program is coming to an end after these last two flights.


We are no longer accepting artwork for this project. The deadline was Aug. 1, 2010.

This is so much more grand than just being associated in a small way with NASA and the Space Shuttle - they are merely the vehicle through which we are able to realize the concept. Granted, we are commemorating the space program for all the technological contributions we now employ - computers, satellite communication (including the internet and many mediums artists currently use) but beyond that, we recognize that space exploration is another expression of mankind's quest to satisfy the desire to understand the unknown. Look at all the scientific discoveries that have been made during the past 50 years. The Hubble telescope alone has revealed some of the wonders of our universe that we never would have known otherwise - and if an artist isn't stirred and inspired by those photos, well, I have some reservations about whether they truly are an artist.

With each new step into space we answer old questions and raise many new ones - much like the discoveries artists make about themselves and their world through art.

Read more about the Fluxface in Space concept in the virtual book here: wix.com/fluxfaceinspace/notations